‘1 in, 2 out’: Trump signs new executive order banning government agencies from making a new regulation – unless they 1st slash TWO existing ones 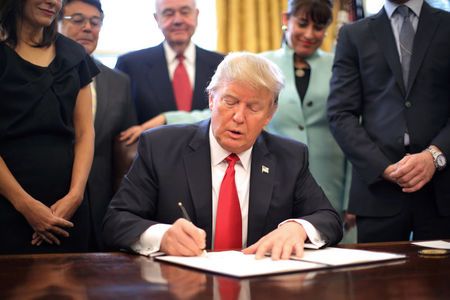 WASHINGTON (Reuters) – President Donald Trump signed an order on Monday that will seek to dramatically pare back federal regulations by requiring agencies to cut two existing regulations for every new rule introduced.

“This will be the biggest such act that our country has ever seen. There will be regulation, there will be control, but it will be normalized control,” Trump said as he signed the order in the Oval Office, surrounded by a group of small business owners.

Trump’s latest executive action will prepare a process for the White House to set an annual cap on the cost of new regulations, a senior official told reporters ahead of the signing.

For the rest of fiscal 2017, the cap will require that the cost of any additional regulations be completely offset by undoing existing rules, the official said on customary condition of anonymity.

Trump, a businessman turned politician, campaigned on a promise to reduce federal regulations that he said burdened American businesses.