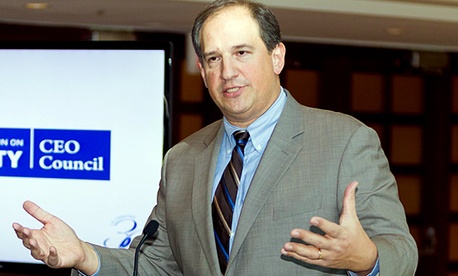 Acting Labor Secretary Seth D. Harris addressed the Annual Legislative Conference of the International Association of Firefighters (IAFF) on Monday. As part of a scathing attack on attempts to reform public employee labor unions, Harris told a joke that he said was â€œmaking the rounds a few years agoâ€:

A unionized public employee, a small-government conservative, and a CEO are sitting around a table with a plate that has a dozen cookies on it. The CEO reaches across and takes 11 cookies, looks at the conservative and says: “Watch out for that union guy, he wants a piece of your cookie.”

Ironically, of course, since the IAFF is a public employee labor union, there are no CEOs. Rather, the firefighters work for the taxpayers, hardly the greedy CEOs caricatured in Harrisâ€™s joke.

Harrisâ€™s assault did not end with the joke. He further accused those attempting to reform public union labor practices as wanting

to tear apart that bargaining table until it’s a pile of firewood. Their goal isn’t to give you a little haircut; their goal is to cut off your head. Their goal, through a campaign of denigration, distortion and demonization, is to destroy public employee unions as we know them, to eliminate them as a force in American life.

Harris took a further swipe at “pundits and professional political hatchetmen,” suggesting that they blamed firefighters and their fellow public union members for the 2008 financial crisis: