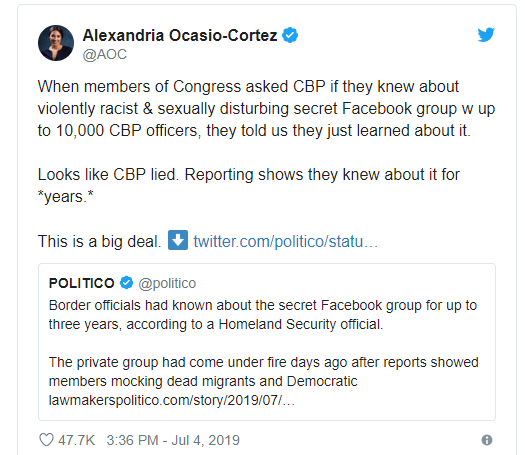 In a Twitter message Thursday, Rep. Alexandria Ocasio-Cortez branded the leadership of U.S. Customs and Border Protection as liars after a news site reported that CBP officials knew much longer than they claimed about a Facebook group on which some past and current CBP employees had posted offensive material.

According to Politico, top CBP officials had known about the offensive posts “for up to three years” – even though officials claimed this week that they had only recently learned about them.

“Looks like CBP lied,” Ocasio-Cortez charged Thursday, one day after the Politico story appeared. “Reporting shows they knew about it for *years.* This is a big deal.”

It was the latest criticism by Ocasio-Cortez, who previously asserted that border-protection personnel have been forcing detained migrants to drink toilet water inside U.S. detention facilities – a claim that some current and former immigration officials have disputed.