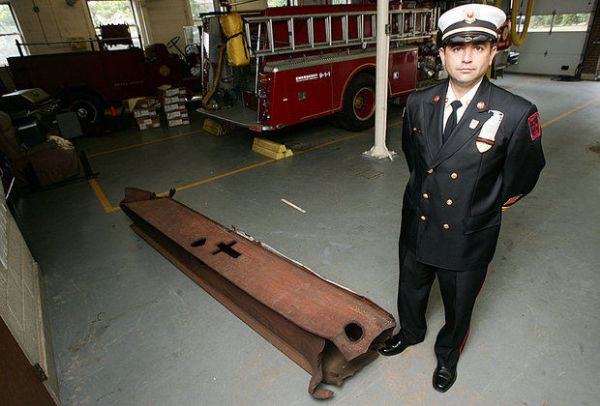 Atheists are threatening to sue over a planned Princeton, N.J., memorial to mark the Sept. 11 terrorist attacks on American soil because a metal beam thatâ€™s part of the display has a small cutout of a Christian cross.

The beam is the brainchild of a firefighter â€” whoâ€™s Jewish â€” who says the cross is actually a historic symbol, not religious, on Fox News. The beam was removed from the site of the World Trade Center debris; the cross shape was then cut into it. But American Atheists say the cutout is â€œgrossly offensive,â€ and members vow to sue the municipality if the memorial goes forth as planned.

The groupâ€™s president, David Silverman, insists that the symbol is religious and that putting it on a public site would be a â€œclear violation of the separation of church and state.â€

He also said the symbol sends a lousy message to those who arenâ€™t Christians, Fox News reported. It would actually give the â€œappearance that all the people who suffered and died on 9-11 and their families are being memorialized by a Christian symbol. That is wrong. That is un-American.â€

173 Comments - what are your thoughts?