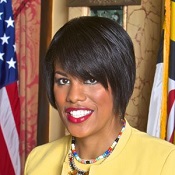 During a Saturday briefing, Baltimore Mayor Stephanie Rawlings-Blake said her city government “gave those who wished to destroy space to do that,” seemingly approving of the rioters who smashed the city’s police vehicles in the wake of the death of Freddie Gray.

Gray, a man with a drug rap sheet arrested on a weapons conviction, suffered a spinal cord injury–perhaps due to rough handling by police–and died on April 19. Reports are inconclusive, however, and the police are not talking.

“I’ve made it very clear that I work with the police, and instructed them to do everything that they could to make sure that the protesters could exercise their right to free speech. It’s a very delicate balancing act…”