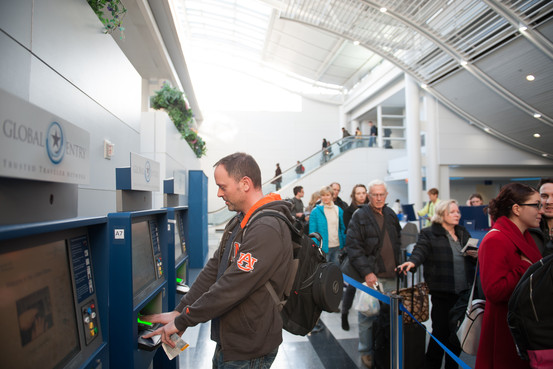 Next to have their jobs automated: airport-security screeners?

Aviation and government authorities are starting to use machines in lieu of people to verify the identities of fliers by scanning their faces, irises or fingerprints. Dozens of airports in Europe, Australia and the U.S. already employ such technology so passengers can pass immigration checks without showing identification to, or talking with, a person. Now, several major airports in Europe have started using these automated ID checks at security checkpoints and boarding gates.

The use of biometrics—computers verifying identities through physical characteristics—and other automated techniques in airport security is raising questions about the strengths of man versus machine in detecting potential terrorists. Industry officials argue the advantages outweigh the risks, and are promoting automation to help make air travel more efficient and less frustrating—and to save money.

Ultimately, the technology could “get rid of the boarding pass completely,” with fliers’ faces serving as their tickets, said Michael Ibbitson, chief information officer of London Gatwick Airport. Gatwick performed a trial this year in which it processed 3,000 British Airways IAG.MC +1.15% fliers without boarding passes. The fliers scanned their irises when checking in, enabling cameras at security checkpoints and boarding gates to automatically recognize them. “We’re only just starting to see what biometrics can do,” he said.

Proponents, including government and industry officials, say that automation of airport security holds the promise to free human screeners so they can focus on detecting suspicious behavior or monitoring flagged travelers. And for some aspects of security, they say, computers can be more thorough and less error-prone than humans.