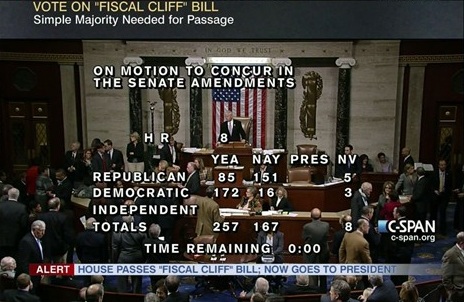 The House voted 257 to 167 to send the measure to Obama for his signature; the vote came less than 24 hours after the Senate overwhelmingly approved the legislation.

House Speaker John A. Boehner (Ohio) and most other top GOP leaders took no public position on the measure and offered no public comment before the 10:45 p.m. vote. Boehner declined even to deliver his usual closing argument, leaving House Ways and Means Committee Chairman Dave Camp (R-Mich.) to defend the measure as the â€œlargest tax cut in American history.â€

The bill will indeed shield millions of middle-class taxpayers from tax increases set to take effect this month. But it also will let rates rise on wages and investment profits for households pulling in more than $450,000 a year, marking the first time in more than two decades that a broad tax increase has been approved with GOP support.

The measure also will keep benefits flowing to 2 million unemployed workers on the verge of losing their federal checks. And it will delay for two months automatic cuts to the Pentagon and other agencies that had been set to take effect Wednesday.

Many economists had warned that the scheduled tax increases and spending cuts would have plunged the economy back into recession.

Conservatives complained bitterly that the legislation would raise taxes without making any significant cuts in government spending. For much of the day, the measure appeared headed for defeat as Boehner contemplated tacking on billions in spending cuts, a move that would have derailed a compromise that the White House and Senate leaders had carefully crafted.

In the end, GOP lawmakers decided not to take a gamble that could force the nation to face historic tax increases for virtually every American â€” and leave House Republicans to take the blame.

â€œI donâ€™t know if playing chicken with the American people at this point is in the best interest of the people,â€ said freshman Rep. Lou Barletta (R-Pa.).

The bill drew 85 votes from Republicans and 172 from Democrats, meaning well more than half of its support came from the Democratic minority.

In a sign of the momentâ€™s gravity, Boehner himself cast a rare vote: He supported the bill. So did Rep. Paul Ryan (Wis.), the GOPâ€™s vice-presidential candidate last year, who parted ways from Sen. Marco Rubio (R-Fla.), a potential 2016 presidential contender, who voted against the measure.

Boehner was humiliated just two weeks ago when the Republican rank-and-file refused to support a GOP alternative that would have permitted taxes to rise only on income over $1 million a year. But when he scheduled a vote on the Senate bill, even some of the chamberâ€™s staunchest conservatives agreed that giving up the fight was probably the best course.