The House Oversight Committee has joined an investigation into the faking of Census Bureau unemployment data that began in the New York Post Sunday.

“These allegations are shocking,” Republican Rep. Blake Farenthold of Texas, chairman of the subcommittee on Federal Workforce, U.S. Postal Service and the Census, wrote in a letter Monday night to U.S. Census Bureau Director John H. Thompson. “If true, there may be a systemic problem at the Philadelphia Regional Census Office, where the alleged data fabrication occurred. These allegations also raise the prospect that the fabrication of data is a widespread problem.”

Farenthold was referring to Jon Crudele’s Post story quoting a Census employee reportedly caught faking results, as well as an anonymous source asserting that the corruption is widespread.

The named employee, Julius Buckmon, told Crudele he was ordered to make up information by superiors at Census, which conducts the monthly employment survey on behalf of the Bureau of Labor Statistics. The employment survey includes a detailed questionnaire and requires extensive follow-up reporting with respondents.

According to Crudele, the Census Bureau has had trouble getting its required 90 percent response rate for the New York and Philadelphia regions, and Buckmon was told to make up the gap with fabricated interviews. The bureau also appears not to have looked into the problem when it was pointed out. 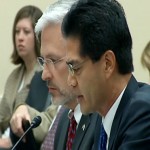 Healthcare.gov ‘may already have been compromised,’ security expert says

It’s about time. How about investigate Odumbo’s phony birth certificate while you’re at it?

And Benghazi and Fast and Furious and IRS and AP and Seal team 6 and refusal to release education record and the down low and the Cocaine smoking and Valery Jarrett and Erick Holder and The Obama care debacle and,and ,and……….

an easier way might be to get a freedom of information request on the State dept issue and transfers or firings from when employees played with/looked at without permission the passport data on BO, his mom and others during the ’08 campaign. That was hushed up pretty well, so we don’t know if they were removing data or planting it.