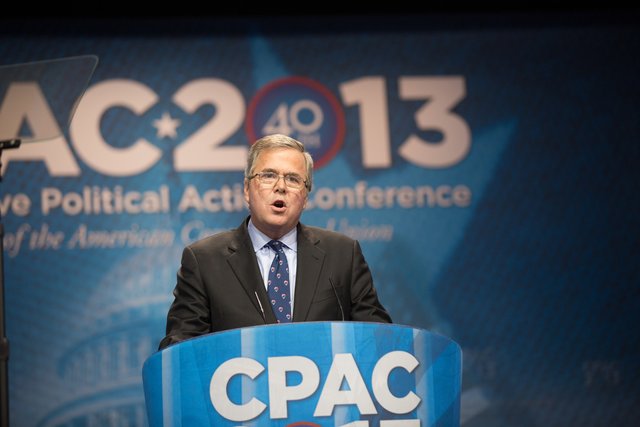 Looking to step out from his brotherâ€™s shadow, former Florida Gov. Jeb Bush reached out to the largest annual gathering of conservatives on Friday, telling the thousands in attendance that in order to rebound from the disappointment of November, Republicans â€œneed to be the party of inclusion and acceptance.â€

â€œI am here to tell you that there is no â€˜usâ€™ and â€˜them,â€™â€ Mr. Bush said, in a thinly veiled jab at the â€œ47â€ percent comments that GOPnominee Mitt Romney made on the 2012 campaign trail. â€œWe need to be the party of inclusion and acceptance.â€

Mr. Bush, who served as governor in Florida from 1999 to 2008, has not ruled out a run for president, and his appearance at CPAC prompted political onlookers to opine that the biggest hurdle standing in front of him could very well be the legacy of former President George W. Bush, his brother.

Conservatives look back with horror at a series of moves made by the Bush administration, in particular the big government policies he pushed and the pile of national debt that he left in his wake.

Working to raise his profile in the wake of the 2012 election, the younger Bush has been making the rounds on national television networks to promote a new book that he inked with Clint Bolick, called â€œImmigration Wars: Forging an American Solution,â€ that offers the GOP a roadmap forward on the thorny issue of immigration.

Mr. Bush, though, has muddied his message by announcing during his roll out that he was open to a pathway to citizenship for the millions of illegal immigrations living here as part of comprehensive immigration reform â€” something he does not advocate in the book.