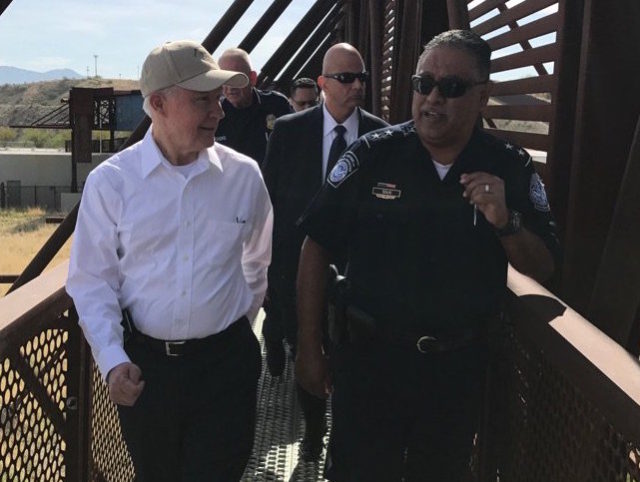 Attorney General Jeff Sessions broke from his tour of the U.S.-Mexico border Tuesday to announce his Justice Department’s sweeping plans for securing the border.

“For those that continue to seek improper and illegal entry into this country, be forewarned: This is a new era. This is the Trump era,” Sessions told the crowd of Customs and Border Protection personnel in the border town of Nogales, Arizona. “We hear you and we have your back!” he assured them.

Sessions proceeded to lay out a multifaceted plan to stop illegal aliens entering the country. All adults apprehended at the border are to be detained and at least 125 additional immigration judges are to be appointed and put in the field on an expedited basis. Twenty-five immigration judges have already been deployed to detention centers along the border to help alleviate the massive backlog of cases already piled up there.

Accompanying the address, the Attorney General’s Office issued a memorandum to all US Attorney’s offices, instructing them on dramatically stricter prosecution guidelines for immigration offenses: all repeat illegal entry offenders are to be referred for felony prosecution; all cases in which an illegal alien is caught reentering the United States after removal are now to be considered for felony prosecution, with priority given to those with other criminal records or gang affiliations; prosecuting those caught transporting three or more illegal aliens will now be a priority; illegal aliens and their smugglers caught with fraudulent documentation, as they often are, are to be charged with aggravated identity theft; and prosecuting any assault on federal law enforcement, included CBP personnel, is to be a “top priority.”