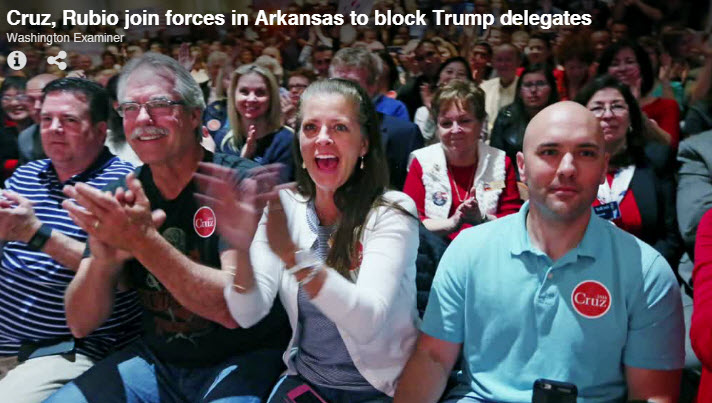 Ted Cruz’s and Marco Rubio’s supporters have teamed up in Arkansas to pack the state delegation with individuals who’ll turn against Donald Trump in a contested convention.

Since Rubio ended his presidential bid March 15, his network of party insiders has lined up behind Cruz to win delegates who’d vote for the Texas senator once they’re no longer bound to Trump in a floor fight. Trump won Arkansas’ GOP primary March 1 with 32.8 percent of the vote compared to Cruz’s 30.5 percent and Rubio’s 24.9 percent. But Cruz’s canny operatives, with Rubio riding shotgun, is likely to thwart Trump in the delegate election.

Trump’s organization is as sloppy in Arkansas as elsewhere, just as Cruz’s is an efficient machine in state after state. This could ding the Donald, costing him as many as 25 delegates after a first inconclusive ballot. Cruz, who finished with 15 out of the available 40 delegates in primary voting, stands to gain all 16 Trump delegates and the 9 won by Rubio.

Bart Hester, a top Rubio organizer in Arkansas, said he’s filling Rubio’s delegate slate with individuals committed to opposing Trump in Cleveland. “I would certainly hope it would be someone who has a leaning toward Cruz rather than Trump,” Hester, a state senator, told the Washington Examiner on Monday.