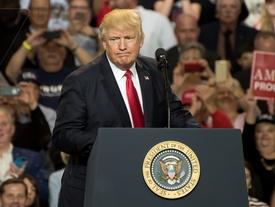 This is the first time the president’s overall approval rating has been back in the 50s in nearly a month. Just after his inauguration, Trump’s job approval peaked at 59% and remained in the 50s every day until early March. It’s gone as low as 42% since then.

The latest figures for Trump include 30% who Strongly Approve of the way Trump is performing and 39% who Strongly Disapprove. This gives him a Presidential Approval Index rating of -9. (see trends).