Democrats bicker over strategy on impeachment

by BY CRISTINA MARCOS,OLIVIA BEAVERS AND MIKE LILLIS | The Hill
September 19, 2019 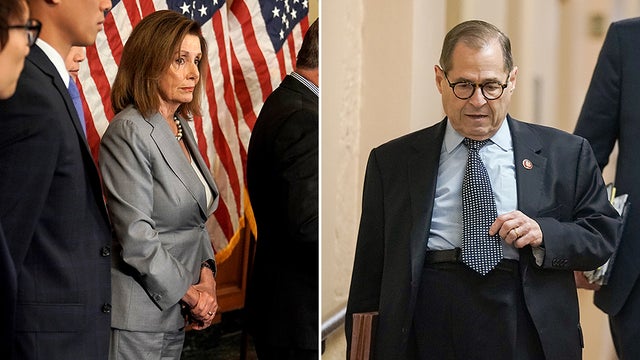 Democrats on Wednesday offered mixed reviews of Corey Lewandowski’s testimony before the Judiciary Committee from the previous day, which quickly devolved into a circus as the former Trump campaign manager refused to answer most questions about his role in the president’s alleged efforts to obstruct the investigation of former special counsel Robert Mueller.

While some lawmakers touted the hearing as a win for their impeachment efforts — Lewandowski confirmed certain damning details of Mueller’s report — others voiced disappointment with the outcome.

“If our objective is to draw out facts and shape the narrative for the American people, that wasn’t a great way to start,” said Rep. Jared Huffman (D-Calif.), who’s among the most vocal impeachment supporters.

“I really think it’s time to tell this story through first-person witnesses in sober, thoughtful hearings,” he added, ”and what we got was a food fight.”

Some Democrats argued the hearing illustrated how Trump and his allies are still engaging in obstruction.

“The Judiciary Committee did exactly what it intended to do,” said Rep. Sheila Jackson Lee (D-Texas), a member of the panel. “The point that the Democrats made, even though it was not a pretty scene — democracy is not pretty — it was clear that he was sent to act up and act out.”

House Democratic leaders and the Judiciary Committee have coordinated on recent legal moves and messaging that seek to paint their impeachment efforts as a formal inquiry. But Pelosi, who’s fighting to protect the moderates who helped her secure the Speaker’s gavel, is publicly treading far more cautiously than Nadler, one of the more aggressive impeachment proponents.

Democrats across the political spectrum are increasingly frustrated with the party’s muddled message on the impeachment process.

“We do have a bit of a split personality disorder on this subject,” said Huffman. “It’s a little confusing to me; I suspect it’s confusing to the American people, too. And I wish we could unify behind this impeachment inquiry that clearly a majority of the caucus wants us to pursue.”

Some Democrats blame Pelosi for compounding confusion as she balances liberals clamoring for impeachment and moderates wary of their reelection prospects.

“She’s contributing to this confusion purposefully,” one Democratic source said.

Impeachment supporters are growing tired of the Speaker’s go-slow approach, while other Democrats note that Pelosi and Nadler simply have different roles to play.

“There’s probably an honest disagreement in the approach here,” said Rep. Ami Bera (D-Calif.), who holds a seat that has been competitive in past election cycles. “He’s been a little bit more aggressive; the Speaker’s probably keenly aware of the political implications and where the American public is.”

Both Pelosi and Nadler dismissed any suggestion of discord between them.

But the two have knocked heads over impeachment for months, particularly after Nadler privately pressed Pelosi in May to greenlight an inquiry.

The difference is even more stark when it comes to how Pelosi and Nadler talk about impeachment.

“Personally, I think the president ought to be impeached,” Nadler told WNYC on Monday in some of his strongest comments to date. “Impeachment is imperative not because he’s going to be removed from office — the Senate won’t do that — but because we have to vindicate the Constitution.”

Just a few days earlier, Pelosi sounded a more restrained note in her weekly press conference, reiterating on Sept. 12 that impeachment is “very divisive” and that Democrats “can’t go there unless we have the facts.”

The friction between the two apparently flared up last week when Pelosi scolded Judiciary Committee staff in a closed-door meeting for getting ahead of the rest of the caucus, according to Politico.

Pelosi’s office declined to comment on the report but downplayed the notion that Pelosi and Nadler have been at odds.

“Speaker Pelosi has repeatedly said she supports Chairman Nadler and House Judiciary’s investigation to determine whether to recommend articles of impeachment, its procedures and efforts to uncover the truth for the American people,” said Pelosi spokeswoman Ashley Etienne.

Democrats, who are pursuing several oversight investigations, have sought to make their case for months to the American people about Trump’s conduct as laid out in the Mueller report.

But the White House has successfully blocked current and former administration officials from testifying using claims of executive privilege. And Democrats on Tuesday struggled to maintain the focus on Lewandowski’s role in events detailed in the Mueller report, in which he was ordered by Trump to pass along a message to then-Attorney General Jeff Sessions that he should reverse his recusal from the Russia probe.

“Eh, it was not the ideal outcome,” one Judiciary Committee source said.

Others questioned whether Lewandowski’s combative testimony moved their investigation forward, as the Trump loyalist was able to reap praise from the president and tease a 2020 Senate run.

Some Democrats said no real progress was made until Barry Berke, the Democratic counsel who is consulting with the committee, questioned Lewandowski under the panel’s newly adopted impeachment hearing procedures that allow questioning by staff on both sides of the aisle after members finish their rounds.

Democrats say Berke elicited one of the best moments of the hearing during his cross-examination: Producing an admission from Lewandowski, the committee’s first fact witness, that he repeatedly lied on cable news shows.

“When he confessed to all of his rampant lying at the end, it brought to life that he was part of a criminal scheme,” said Rep. Jamie Raskin (D-Md.), a member of the committee. “I thought it was very powerful.”

While the White House had sought to limit his testimony to just the four corners of the Mueller report, Lewandowski went beyond the administration’s order and refused multiple times to discuss his private conversations with the president, even if they were detailed in the 448-page report. Democrats rejected both the White House limitations and the claims of privileged conversations made by Lewandowski, who never worked in the White House.

Yet some are worried Lewandowski set a precedent for other witnesses, if his recalcitrance goes without consequences; others, however, say he is a small fish to fry compared to their primary target.

“I’ve been asked several times today whether the committee will hold you in contempt. It is certainly under consideration,” Nadler said Tuesday after lawmakers concluded their questioning. “There is a far more troubling contempt on display today, and that is President Trump’s role in your refusal to answer questions.”

Democrats, whose investigations into Trump have burgeoned to include a range of new areas, banked on witness testimonies to help build their case as polling suggests the public isn’t sold on impeachment. But some centrists in crucial swing districts are expressing concern that the persistent focus on impeachment and related investigations could backfire.

Rose, who flipped a longtime GOP district in 2018, warned that Americans will think Democrats are “conducting a bait-and-switch on them” if they focus on impeachment and that it threatens to overshadow the policy agenda they ran on last year.