by Barton Gellman and Laura Poitras, The Washington Post
June 7, 2013 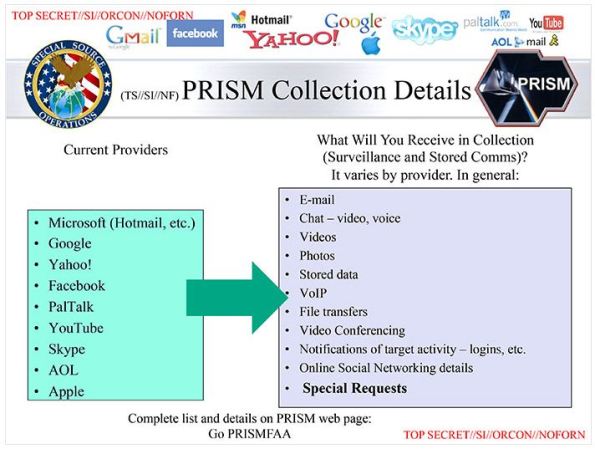 The National Security Agency and the FBI are tapping directly into the central servers of nine leading U.S. Internet companies, extracting audio and video chats, photographs, e-mails, documents, and connection logs that enable analysts to track foreign targets, according to a top-secret document obtained by The Washington Post.

The program, code-named PRISM, has not been made public until now. It may be the first of its kind. The NSA prides itself on stealing secrets and breaking codes, and it is accustomed to corporate partnerships that help it divert data traffic or sidestep barriers. But there has never been a Google or Facebook before, and it is unlikely that there are richer troves of valuable intelligence than the ones in Silicon Valley.

Equally unusual is the way the NSA extracts what it wants, according to the document: â€œCollection directly from the servers of these U.S. Service Providers: Microsoft, Yahoo, Google, Facebook, PalTalk, AOL, Skype, YouTube, Apple.â€

PRISM was launched from the ashes of President George W. Bushâ€™s secret program of warrantless domestic surveillance in 2007, after news media disclosures, lawsuits and the Foreign Intelligence Surveillance Court forced the president to look for new authority.

Congress obliged with the Protect America Act in 2007 and the FISA Amendments Act of 2008, which immunized private companies that cooperated voluntarily with U.S. intelligence collection. PRISM recruited its first partner, Microsoft, and began six years of rapidly growing data collection beneath the surface of a roiling national debate on surveillance and privacy. Late last year, when critics in Congress sought changes in the FISA Amendments Act, the only lawmakers who knew about PRISM were bound by oaths of office to hold their tongues.

The court-approved program is focused on foreign communications traffic, which often flows through U.S. servers even when sent from one overseas location to another. Between 2004 and 2007, Bush administration lawyers persuaded federal FISA judges to issue surveillance orders in a fundamentally new form. Until then the government had to show probable cause that a particular â€œtargetâ€ and â€œfacilityâ€ were both connected to terrorism or espionage.