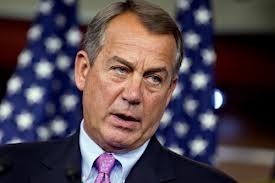 Thereâ€™s no word for it other than a purge and Speaker of the House John Boehner is the leader of the Politburo. With no advanced warning, several staunch conservatives in Congress suddenly found themselves relieved of their committee duties. The reason? Theyâ€™d become too conservative for post-2012 election Boehner:

Two of the most conservative Republicans in the House of Representatives have been kicked off the House Budget Committee, a rare move that could make it easier for the panel to advance a deal with Democrats to cut fiscal deficits.

Representatives Tim Huelskamp of Kansas and Justin Amash of Michigan â€“ both favorites of the anti-tax Tea Party movement â€“ are among those Republicans voting most often against House Speaker John Boehner.

Huelskamp and Amash, who both will begin second terms in the House next month, voted against last yearâ€™s deal to raise the federal debt limit and staunchly oppose any tax increases. Boehner has now included new revenue in his latest offer to avert the â€œfiscal cliffâ€ of year-end tax hikes and automatic spending cuts. Given their voting records, winning support from Huelskamp and Amash for such a compromise seemed an uphill battle.

Two of the strongest warriors for our freedom, gone. There can be no doubt now that Boehner will cave to the presidentâ€™s demands and raise our taxes. And he doesnâ€™t want anyone voting against him on the Budget Committee when he does.

Mitt Romney, a moderate establishment Republican, lost the election. So Boehner decided that means he has to kill the Tea Party and sell out the countryâ€™s economic freedom. Itâ€™s the sort of logic that only exists in Washington.