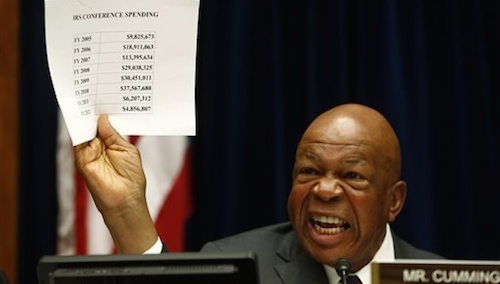 Emails delivered to the House Oversight Committee by the IRS have revealed shocking collusion between committee Democrats and the IRS bureaucrats in the targeting of conservative groups. Moreover, the staff of Rep. Elijah Cummings, who has done everything in his power to obstruct and denigrate the inquiry, are revealed to have secretly collaborated with the IRS in the targeting, despite Rep. Cummings’ denials. This is serious stuff. CJ Ciaramella of the Free Beacon reports:

Cummings publicly requested information from True the Vote in October 2012 on its volunteer activities and training.

Five days later, the IRS sent True the Vote a letter requesting the group provide the agency with copies of its volunteer registration forms and additional information on its volunteer activities.

Cummings’ staff requested more information from the IRS about True the Vote in January 2013. The request was channeled from the IRS’ Legislative Affairs office to several other IRS officials, including Lerner.