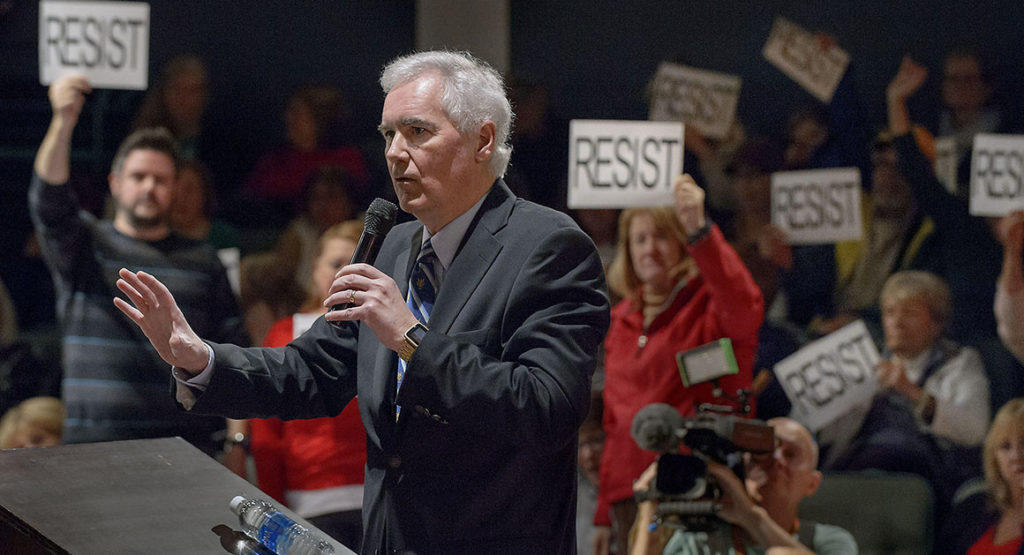 House Republicans during a closed-door meeting Tuesday discussed how to protect themselves and their staffs from protesters storming town halls and offices in opposition to repealing Obamacare, sources in the room told Politico.

House GOP Conference Chairwoman Cathy McMorris Rodgers invited Rep. David Reichert, a former county sheriff, to present lawmakers with protective measures they should have in place. Among the suggestions: having a physical exit strategy at town halls, or a backdoor in congressional offices to slip out of, in case demonstrations turn violent; having local police monitor town halls; replacing any glass office-door entrances with heavy doors and deadbolts; and setting up intercoms to ensure those entering congressional offices are there for appointments, not to cause chaos.

“The message was: One, be careful for security purposes. Watch your back. And two, be receptive. Honor the First Amendment, engage, be friendly, be nice,” said Republican Study Committee Chairman Mark Walker (R-N.C.). “Because it is toxic out there right now. Even some of the guys who have been around here a lot longer than I have, have never seen it to this level.”

He later added: “For those of us who have children in grade school and that kind of thing, there’s a factor in all of this, saying: How far will the progressive movement go to try to intimidate us?”

The conference discussion comes as Democratic activists around the nation ramp up protests against Republican efforts to repeal Obamacare. Protesters have disrupted town halls and other public events, jeering and yelling at Republicans just as conservatives did to Democrats when they were writing the law eight years ago. Conservative protesters in 2009 and 2010 were accused of spitting on and hurling racial epithets at Democratic lawmakers ahead of their votes to pass Obamacare. Republicans denied the accusations at the time.