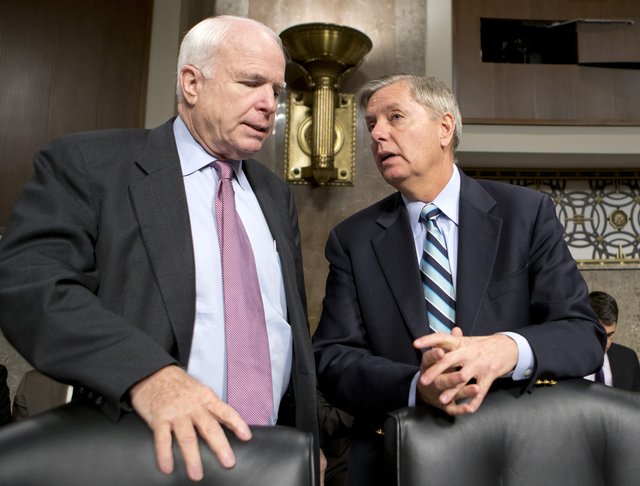 Sen. Rand Paulâ€™s filibuster didnâ€™t thrill all of his colleagues.

Almost exactly 24 hours after Mr. Paul began his information-seeking filibuster against John O. Brennan, Sens. John McCain and Lindsey Graham took to the Senate floor to denounce his demands and say he was doing a â€œdisserviceâ€ to the debate on drones.

â€œThe country needs more senators who care about liberty, but if Mr. Paul wants to be taken seriously he needs to do more than pull political stunts that fire up impressionable libertarian kids in their college dorms. He needs to know what heâ€™s talking about,â€ said Mr. McCain, Republicansâ€™ presidential nominee in 2008 â€” who topped Mr. Paulâ€™s father, former Rep. Ron Paul, in that yearâ€™s primary.

And where Democrats praised Mr. Paul for using Senate rules properly to launch a filibuster, Mr. McCain said it was an abuse of rules that could hurt the GOP in the long run.

â€œWhat we saw yesterday is going to give ammunition to those who say the rules of the Senate are being abused,â€ the Arizona Republican said.

Mr. Paul said he was filibustering to get the administration to affirm it wonâ€™t kill non-combatant Americans in the U.S. â€” and his effort was joined by more than a dozen other senators who said they, too, supported his effort to get answers.

Mr. Graham said asking whether the president has the power to kill Americans here at home is a ludicrous question.