Hearing erupts as Acting AG Whitaker calls time on Dem chairman: ‘Your 5 minutes is up’ 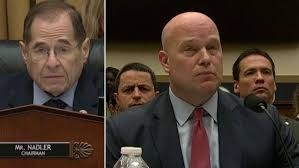 Acting Attorney General Matthew Whitaker stunned onlookers and lawmakers during an already-contentious House hearing Friday, when he tried to call time on the Democratic chairman after yet another line of questioning regarding Special Counsel Robert Mueller’s Russia probe.

The retort came after Chairman Jerrold Nadler, D-N.Y., first said he wanted Whitaker to appear for a private deposition after the hearing and went on to ask Whitaker whether he had been “asked to approve any requests or action” for the special counsel.

“Mr. Chairman, I see that your five minutes is up, so…” Whitaker replied as the hearing room broke out in gasps. “I am here voluntarily. We have agreed to five-minute rounds.”

Nadler, who even cracked a slight smile at the response, repeated his question, and Whitaker ultimately responded: “I have not interfered in any way with the special counsel’s investigation.”