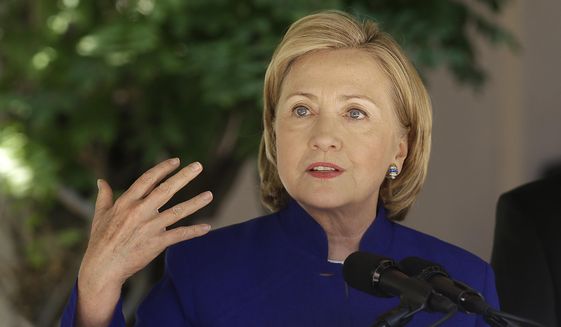 Former Secretary of State Hillary Clinton dialed back her critical comments on President Obama’s foreign policy, reaching out to the White House by phone to clarify that she didn’t mean to offend.

“Earlier today, the secretary called President Obama to make sure he knows that nothing she said was an attempt to attack him, his policies, or his leadership,” said Nick Merrill, a spokesman for Mrs. Clinton, in a widely reported statement. “While they’ve had honest differences on some issues, including aspects of the wicked challenge Syria presents, she has explained those differences in her book and at many points since then.”

Mrs. Clinton caused quite a stir with her comments to The Atlantic about Mr. Obama’s behind-scenes mantra on foreign policy, summed by White House aides as “Don’t do stupid stuff.”