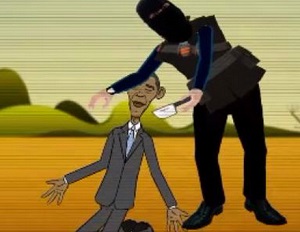 Affiliates of the Islamic State group have released an animated video depicting a jihadist beheading US President Barack Obama.

The clip, which was uploaded and translated on Saturday by MEMRI, a US-based Middle Eastern media watchdog group, begins with the words “Message to America,” followed by a scene portraying the American president on his knees and crying profusely.

The president’s head is seen held by “Jihadi John” — the British citizen infamous for his role in videos showing the grisly executions of Western citizens captured by the terrorist group — who slaps the American president on the head, calling him a “mule” in Arabic.

“This knife has been craving Obama’s stinky blood and today Allah gave us the power to capture the mule of the Jews,” the executioner says, slapping the president once again and demanding he speak. …