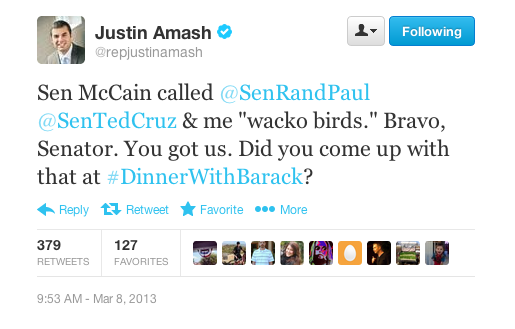 U.S. Rep. Justin Amash (R-Mich.) slammed Sen. John McCain’s (R-Ariz.) charge that he and two conservative Senators were “wackos,” chiding him on Twitter for the criticism after he participated in a dinner excursion with President Barack Obama on Wednesday.

Amash was responding to McCain’s wide-ranging interview with the Huffington Post’s Jon Ward, during which was asked whether he views the younger conservatives of the party â€” specifically Amash and Sens. Ted Cruz and Rand Paul â€” as a “positive force.”

“They were elected, nobody believes that there was a corrupt election, anything else,” McCain said. “But I also think that when, you know, it’s always the wacko birds on right and left that get the media megaphone.”

“I think it can be harmful if there is a belief among the American people that those people are reflective of the views of the majority of Republicans. They’re not,” he continued.

I asked McCain to clarify who, specifically, he was talking about.

McCain’s harsh words came the same day as he launched into a spirited critique of Paul on the Senate floor with Sen. Lindsey Graham, targeting Paul for his 13-hour, marathon filibuster to block John Brennan’s confirmation as CIA Director.