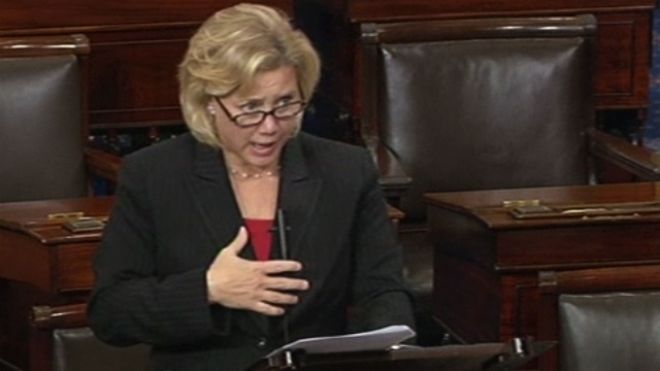 Shortly before 4 a.m., the Louisiana Democrat strode from her desk on the Democratic side of the chamber all the way to the Texas Republicanâ€™s desk on the far side to give him a piece of her mind after Cruz insisted on a roll call vote on his amendment to the Senate budget resolution. Cruz wanted to create a new point of order against funding the United Nations as long as any of its member nations have a policy of involuntary abortions.

â€œI suggested to him that a more direct and a more effective route might be for Texas to stop all exports to China or to stop any financial exchanges between Texas and China,â€ Landrieu told CQ Roll Call after she voted on the budget shortly before 5 a.m.

â€œThat would have had a much more direct effect on what he was trying to do than take money from the U.N. … I thought he might like the idea. He should try it next time,â€ Landrieu said.

After a cross-looking Landrieu left to return to her desk, a bemused Cruz smirked and chatted with Sen. Marco Rubio, R-Fla., who voted for the amendment.

The amendment had zero chance of passing â€” it was defeated 38-61 â€” but like many of the other amendments considered well after midnight, it appeared to be aimed at putting senators in a politically difficult position: either they go on record whacking the United Nations or they face the potential for attack ads saying they voted to protect forced abortions in China.

â€œI recognize that members of this body have differing views on the right to life, but surely all of us can be agreed that for a woman to be forced against her will to abort her child is a horrific evil,â€ Cruz said as he introduced his amendment.