by By Gabriella Muñoz - The Washington Times
November 28, 2018 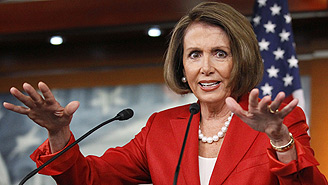 Liberal activists were among Rep. Nancy Pelosi’s fiercest critics over the last several years, but progressive group leaders have emerged as the strongest supporters of her bid to return as speaker of the House, saying she’s the only pick to lead the party over the next two years.

While Democrats clamor for a new generation of leaders to emerge from Wednesday’s House Democratic Caucus leadership elections, leaders of progressive groups say they’re on board with turning the keys back over to Mrs. Pelosi, who has led her party for the last 16 years.

“We want the boldest and the most progressive speaker as possible in this moment. That is almost certainly Nancy Pelosi,” Adam Green, co-founder of the Progressive Change Campaign Committee, told The Washington Times.

Mrs. Pelosi will learn just how much support she has Wednesday in the leadership elections, where she needs a majority of Democrats who will be in the House next year to vote for her.