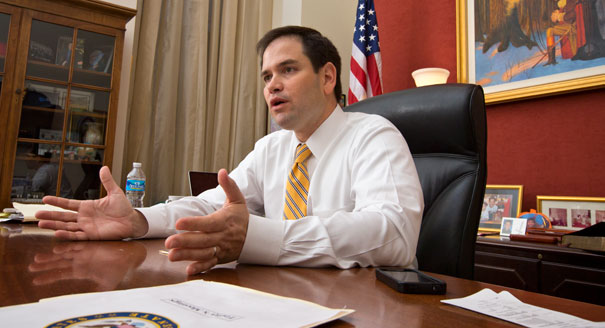 Sen. Marco Rubio (R-Fla.) issued an Easter morning statement saying he is â€œencouragedâ€ by progress in talks on immigration reform, but added: â€œReports that the bipartisan group of eight senators have agreed on a legislative proposal are premature.â€

The headline of his statement, timed for release just before the Sunday talk shows: â€œRubio: No final agreement on immigration legislation yet.â€

Rubio, whose support is crucial if the Senateâ€™s â€œGang of Eightâ€ is to have a deal, spoke out a day after business and union groups signed off on a temporary-worker program that appeared to be the biggest remaining hurdle for Senate negotiators.

Officials close to the negotiations say the Senate group is on track to announce a deal shortly after the Senate returns the second week of April. But Rubio made it clear in his statement that he wonâ€™t be rushed.

â€œI believe we will be able to agree on a legislative proposal,â€ he said. â€œHowever, that legislation will only be a starting point. â€¦ Arriving at a final product will require it to be properly submitted for the American peopleâ€™s consideration, through the other 92 senators from 43 states that werenâ€™t part of this initial drafting process.â€

â€œIâ€™m encouraged by reports of an agreement between business groups and unions on the issue of guest workers. However, reports that the bipartisan group of eight senators have agreed on a legislative proposal are premature.