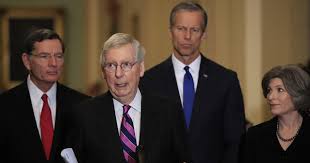 McConnell, R-Ky., said during a press conference in Louisville on Monday that the House-passed resolution has enough GOP support to clear the Senate and end up on Trump’s desk.

“What’s clear in the Senate is there will be enough votes to pass the resolution of disapproval,” McConnell said.

At least four GOP lawmakers plan to vote for the resolution, which would provide the simple majority needed to pass it.