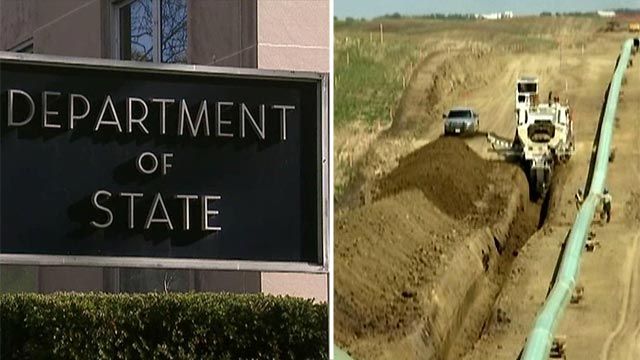 WASHINGTON â€“ The State Department on Friday raised no major objections to the Keystone XL oil pipeline and said other options to get the oil from Canada to U.S. Gulf Coast refineries are worse for climate change.

But the latest environmental review stops short of recommending whether the project should be approved. State Department approval of the 1,700-mile (2,735-kilometer)pipeline is needed because it crosses a U.S. border.

The lengthy report says Canadian tar sands are likely to be developed, regardless of whether the U.S. approves Keystone XL, which would carry oil from western Canada to refineries in Texas. The pipeline would also travel through Montana, South Dakota, Kansas, Nebraska and Oklahoma.

The report acknowledges that development of tar sands in Alberta would create greenhouse gases but makes clear that other methods to transport the oil — including rail, trucks and barges — also pose a risk to the environment.

The State Department analysis for the first time evaluated two options using rail: shipping the oil on trains to existing pipelines or to oil tankers. The report shows that those other methods would release more greenhouse gases that contribute to global warming than the pipeline. The Keystone XL pipeline, according to the report, would release annually the same amount of global warming pollution as 626,000 passenger cars.