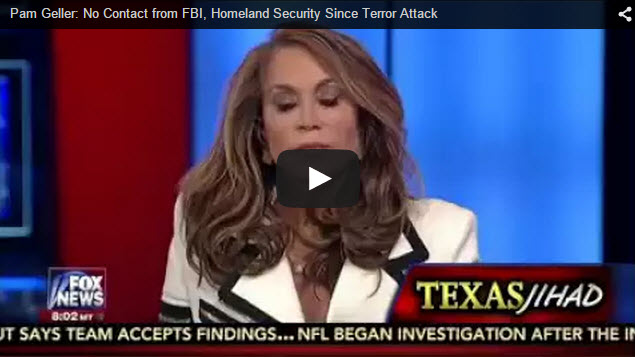 Pamela Geller, the woman targeted by terrorists in Texas over the weekend, says the FBI and the Department of Homeland Security have yet to contact her after the thwarted attacked. She made the comments last night in an interview with Sean Hannity.

“This is a serious threat,” said Hannity. “Basically a Fatwa, a death threat, has now been issued. Your reaction to that? Have you had any contact with the FBI?”

“They have not contacted me, but of course we’ve now increased my team. I have a team now, private security, and NYPD counterterror has been in touch with me,” said Geller.

“Did you reach out to the FBI?”

“I did,” Geller confirmed.

“No, and this is interesting because this is a terrorist threat. And the FBI, President Obama should provide security. There’s no question about it. Because he created an environment that raised the stakes on this,” Geller said.

182 Comments - what are your thoughts?