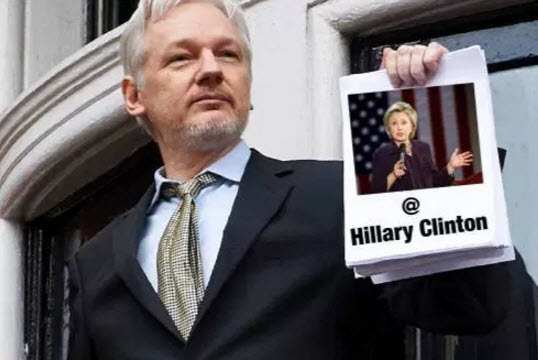 UPDATED: After canceling a planned announcement in London, Wikileaks founder Julian Assange is now planning to appear via video link Tuesday morning at Wikileak’s tenth anniversary celebration in Berlin. He’s a last-minute addition to the roster of festivities taking place this week in Germany.

Wikileaks used its Facebook page to confirm that Assange would speak at the event, which takes place at 3am Eastern time.

Sources close to the event tell Heat Street that Assange may be planning to release some new information his organization has obtained about the U.S. Democratic Party. But Heat Street has yet to receive independent confirmation that Assange plans to dump information specifically on Hillary Clinton.

The news that Assange plans to appear (remotely) in Berlin comes after Wikileaks abruptly canceled a much-anticipated announcement in London that was to be made from the balcony of London’s Ecuadorian Embassy, where Assange has sought sanctuary for years. The cancelation was first reported by NBC News. According to NBC’s Jesse Rodriguez, the announcement was canceled due to “security concerns”.

There had been widespread anticipating that Tuesday’s announcement might have been Assange’s long-promised document dump on Hillary Clinton.