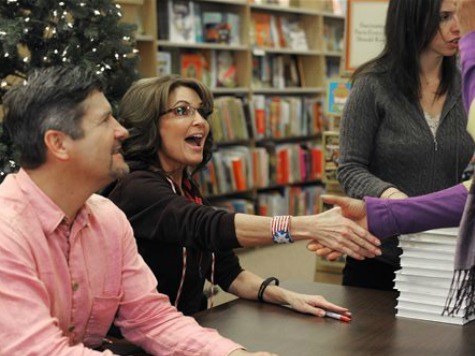 Former Alaska Governor Sarah Palin’s book tour is taking her to cities where establishment Republicans will not feel safe as the 2014 midterm elections near, even as entrenched establishment groups attempt to wage war against Tea Party candidates.

While promoting her blockbuster book, Good Tidings and Great Joy: Protecting the Heart of Christmas, Palin will have at least six stops where Republican establishment politicians will not feel safe next year.

David Freedlander of the Daily Beast notes that “Bethlehem [which was Palin’s first stop] is represented by Rep. Charlie Dent (R-PA),” whom he describes as “one of the leaders of the moderate faction of House Republicans… who faced a primary challenge from the right in 2012.”

The Daily Beast also points out that Palin’s tour includes stops in Columbus, Ohio, where Rep. Pat Tiberi (R-OH) is being targeted for a challenge on the right; Grand Rapids, Michigan, where the Republican establishment will try to wage war against incumbent Tea Party Rep. Justin Amash (R-MI); Kentucky, where Senate Minority Leader Mitch McConnell (R-K) is being challenged by Tea Party candidate Matt Bevin; Georgia, “where a GOP primary for an open Senate seat is turning into a free-for-all”; Texas, “where John Cornyn, the Senate minority whip, still hasn’t received the backing of Tea Party favorite and fellow Texan Ted Cruz in a seat that the grass roots feel should belong to them.”

“Her message resonates with the average person,” Ron Devito, who runs the website US4Palin, told Freelander before a jam-packed book signing. “She supports limited government, free markets, low taxes, and our Constitution.”