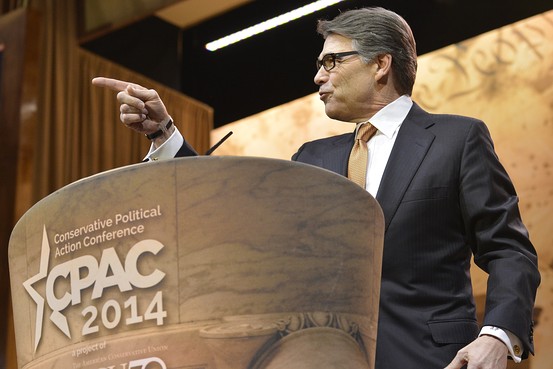 Texas Gov. Rick Perry (R) rallied the early-morning crowd to its feet to kick off the second day of the Conservative Political Action Conference, giving one of the more rousing speeches so far delivered at the three-day event.

“It is time for Washington to focus on the few things the Constitution establishes as the federal government’s role. Defend our country, provide a cogent foreign policy, and what the heck, deliver the mail, preferably on time and on Saturdays,” Perry said, bouncing on his heels and waving his fist, whipping the conservative crowd into a frenzy.

“Get out of the healthcare business. Get out of the education business. Stop hammering industry. Wake the sleeping giant of American enterprise,” Perry said to roaring cheers.

The Texas governor has been working to rehab his image with the GOP base since his epic flame-out as a 2012 presidential candidate, and is mulling another run for president in 2016. While he starts off in a much weaker position than he did four years ago, the CPAC speech proved Perry can still get conservatives excited.

Perry sought to draw a sharp contrast between red-state and blue-state governors.