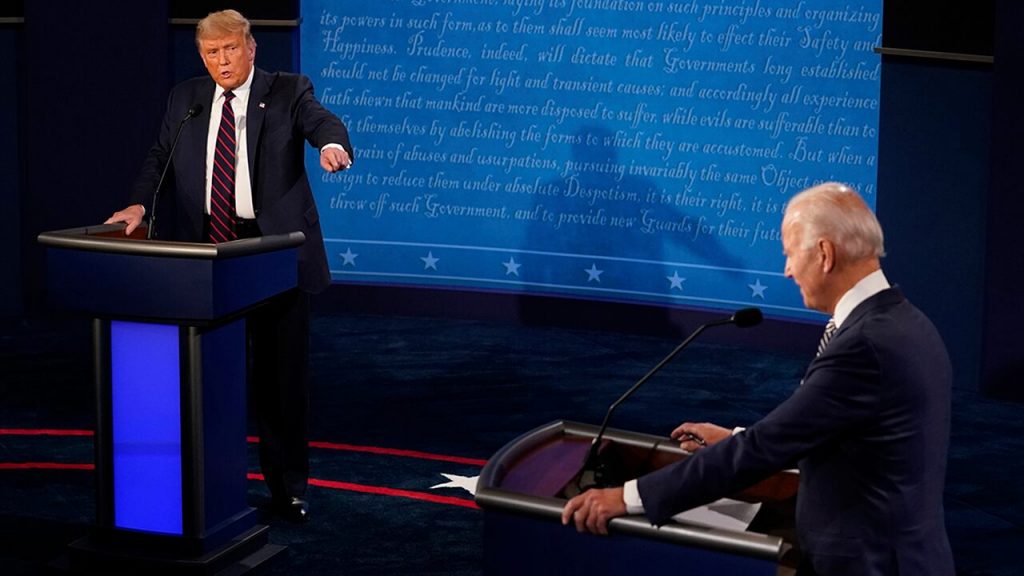 The first of three showdowns between Trump, 74, and Biden, 77, devolved into attacks on Hunter Biden, smarts and schoolyard name-calling. As Trump went on offense, Biden tried to shut him down by calling the president a “clown” and a “liar.”

Wallace scolded Trump repeatedly for not following the debate rules by interrupting and the veteran newsman often played the role of a wrestling referee rather than a moderator.

“Gentlemen, I hate to raise my voice, but why shouldn’t I be different than the two of you?” Wallace said.

Trump came out swinging, but Biden held his own and didn’t fall into previous debate pitfalls where he cut his time short or stumbled to get out responses. The two men often talked over each other in a brawl that got unwieldy at times.

The president touted his record in the White House on boosting the economy and how he handled the pandemic, proclaiming: “There has never been an administration or president who has done more than I’ve done in a period of three and a half years, and that’s despite the impeachment hoax.”

But Biden said under Trump the country has become weaker, sicker, poorer and more violent.

“You’re the worst president America has ever had,” Biden said at one point.

Biden sought to define himself as the steady leader of the Democratic Party and distanced himself from Bernie Sanders’ health care plan and Rep. Alexandria Ocasio-Cortez’s Green New Deal.

Trump accused Biden of failing to admonish violent rioters and stand up for law enforcement in Democratic-led cities that have been unraveling with racial unrest.

“The people of this country want and demand law and order and you’re afraid to even say it,” Trump said.

Wallace asked Biden why he doesn’t call the mayor of Portland, Ore., to bring in the National Guard to stop the violence.

“I don’t hold public office now,” Biden said, adding that “the violence should be prosecuted.”

Wallace turned to Trump and asked him: “Are you willing, tonight, to condemn white supremacists and militia groups and to say that they need to stand down?”

Trump said he’d be willing to do it, but then said: “Proud Boys, stand back and stand by. But I’ll tell you what, somebody’s got to do something about Antifa and the left.”

“Antifa is an idea, not an organization,” Biden responded, referencing FBI Director Christopher Wray’s claim that Antifa was more of a movement or ideology.

The debate in Cleveland kicked off with Trump standing by his Supreme Court pick of Judge Amy Coney Barrett and his push to get her confirmed by the Senate before the Nov. 3 election.

“We won the election. Elections have consequences,” Trump said, justifying why he appointed a nominee in an election year.

Biden, who declined to say whether he supports packing the court or ending the Senate filibuster, said the American people should decide who succeeds the late Justice Ruth Bader Ginsburg, who died Sept. 18.

“We should wait and see what the outcome of this election is because that’s the only way the American people get to express their view,” Biden said.

The debate quickly devolved into Trump tussling Wallace and then with Biden over health care and the Obama-era Affordable Care Act.

Trump accused Biden of trying to get rid of private health insurance. “Not true,” Biden retorted.

“I am the Democratic Party right now,” Biden said. He also hit back at Trump for his handling of the coronavirus and for wanting to repeal ObamaCare’s protections for preexisting conditions.

Trump lobbed attacks on Biden, including on his smarts and crowd sizes. Biden tried to shut him down by calling him a liar, “clown” and asking, “Will you shut up, man?”

“Folks, do you have any idea what this clown is doing?” Biden said at another point.

Trump hit Biden for his 47-year record in Washington and accused Biden of wanting to keep the country shut down like a prison during the pandemic.

“There’s nothing smart about you, Joe,” Trump said.

Trump went after Biden for his son Hunter’s dealings at Burmisa in Ukraine, which served as the origin for Trump’s impeachment.

Biden defended Hunter as doing nothing wrong and said he’s proud of his son for overcoming drug addiction.

Biden went on to talk passionately about his late son, Beau, and his service to the country before his death from cancer in 2015.

Biden mentioned the disparaging comments Trump reportedly made about veterans, as reported by The Atlantic.

“My son was in Iraq. He spent a year there. … He was not a loser. He was a patriot. And the people left behind there were heroes,” Biden said.

Trump took the conversation back to Biden’s other son: “Oh, really? Are you talking about Hunter?”

It was the first presidential debate of the unprecedented 2020 election cycle, marred by a global pandemic and expanded early and mail-in voting opportunities to prevent the spread of the deadly coronavirus.

Voting is already underway in many states, including the battlegrounds of Pennsylvania, Michigan and Minnesota. Nationwide nearly 1.3 million people have already cast their ballots either by mail or through early in-person voting, according to the U.S. Elections Project.

The Trump campaign, which has tried to keep a robust travel schedule despite the pandemic, had pushed unsuccessfully for a much earlier fourth debate to account for the new voting schedules.

Trump and his allies have for months depicted Biden as hiding from the media in his basement and have relished in an opportunity to face off with Biden, who would be unaided by a teleprompter.

The Biden campaign has benefited from a record-shattering $364.5 million in fundraising in August and a consistent lead in the public polls nationally and in many swing states. Biden has sought to keep the focus on Trump’s handling of the coronavirus pandemic, which has cost more than 200,000 lives in the United States.

The next Biden-Trump debate is slated for Oct. 15 and the final one is Oct. 22. Vice President Mike Pence and Biden’s running mate, Sen. Kamala Harris, D-Calif., will face off next in the vice presidential debate on Oct. 7.