Rand Paul on what Obama should tell Pope Francis 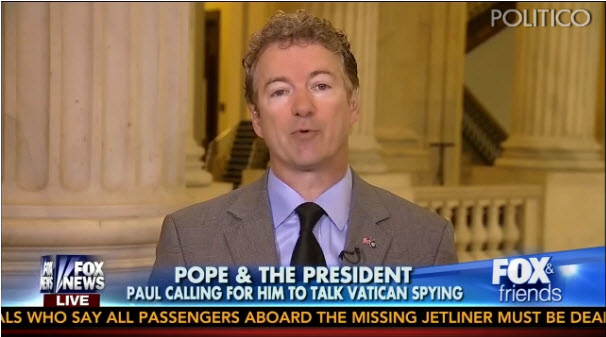 With President Barack Obama set to meet Pope Francis this week, Sen. Rand Paul said Tuesday the president has some explaining to do.

“He ought to explain to the pope why he is telling businesses in America they can’t remain true to their faith and stay in business,” the Kentucky Republican said on Fox News’s “Fox and Friends.”

Paul brought up the lawsuit being heard by the Supreme Court on Tuesday that challenges the part of the Affordable Care Act that mandates coverage for birth control. The suit is being brought by businesses that say the rule violates their religious freedom.

“The ‘Hobby Lobby’ case is being discussed today, and I think it’s important that he tell the leader of the Catholic Church why he thinks that businesses owned by Catholics can’t make their own decisions with regard to health care,” Paul said.

The outspoken senator said he agreed with the Vatican chief justice, who reportedly in a recent interview said Obama’s policies are “hostile” to Christians.