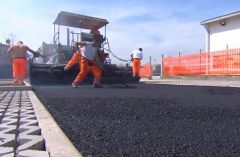 (CNSNews.com) – “Our economic policy can be summed up in three very simple but beautiful but beautiful words,” President Donald Trump told a rally in Montana Thursday evening: “Jobs, jobs, jobs,” he said.

On Friday, the Labor Department’s Bureau of Labor Statistics said the economy added 213,000 jobs in June, a strong number; the number of employed Americans, 155,576,000, set its tenth record of the Trump presidency; but the number of unemployed Americans (which includes people who are actively looking for jobs) increased by almost half-a-million. The unemployment rate increased two tenths of a point to 4.0 percent.

In June, the nation’s civilian noninstitutionalized population, consisting of all people age 16 or older who were not in the military or an institution, reached 257,642,000. Of those, 162,140,000 participated in the labor force by either holding a job or actively seeking one.