Rick Perry: Obama Either ‘Inept’ or Has ‘Ulterior Motive’ in Border Crisis 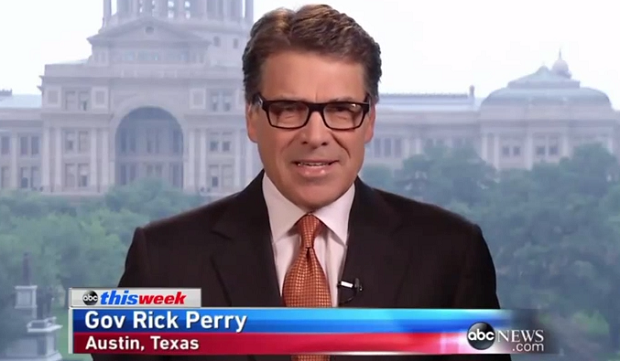 On Sunday, Republican Texas Governor Rick Perry said that if President Barack Obama is not completely “inept,” Obama may have ulterior motives for not caring about the border crisis.  On ABC’s This Week, Perry said that he first gave Obama a letter four years ago asking for more resources at the border, and the Obama administration still has not responded.  “I have to believe that when you do not respond in any way, that you are either inept, or you have some ulterior motive of which you are functioning from,” Perry said. “I don’t believe he particularly cares whether or not the border of the United States is  … secure. And that’s the reason there’s been this lack of effort, this lack of focus, this lack of resources.” Perry said Obama “has sent powerful messages time after time … by his policies, by nuances, that it is okay to come to the United States, and you can come across, and you’ll be accepted in open arms.” “I will tell you they either are inept or don’t care, and that is my position,” Perry said. The number of illegal immigrants crossing the border has drastically increased since Obama unilaterally enacted his temporary amnesty