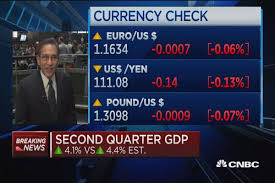 Gross domestic product grew at a solid 4.1 percent pace in the second quarter, its best pace since 2014, boosting hopes that the economy is ready to break out of its decade-long slumber.

The number matched expectations from economists surveyed by Reuters and was boosted by a surge in consumer spending and business investment. Stock market futures edged lower on the news while government bond yields moved lower.

That’s the fastest rate of the growth since the 4.9 percent in the third quarter of 2014 and the third-best growth rate since the Great Recession. In addition to the strong second quarter, the Commerce Department revised its first-quarter reading up from 2 percent to 2.2 percent.

“We’re on track to hit the highest annual growth rate in over 13 years,” President Donald Trump said in remarks an hour after the report hit. “And I will say this right now and I will say it strongly, as the deals come in one by one, we’re going to go a lot higher than these numbers, and these are great numbers.”