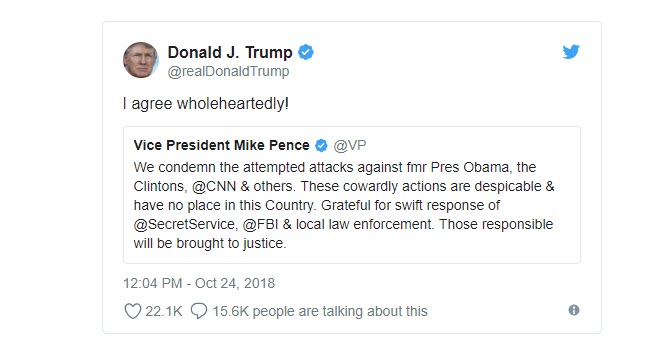 Local reports said the Florida building housing the office of Rep. Debbie Wasserman Schultz, former Democratic Party chairwoman, was evacuated amid reports of a possible suspicious package. Police in the area seemed to confirm the incident in a Twitter alert:

CNN employees said Wednesday that they were evacuated as well from their New York office, after reports of a suspicious package at the Time Warner Center. CNN said the package with a suspicious device was addressed to ex-CIA director John Brennan (who is an analyst for NBC).

This comes after an explosive device was found days earlier in the mailbox of liberal billionaire George Soros, though it’s unclear if the incidents are related.

As teams across the country investigate, White House Press Secretary Sarah Sanders, in a written statement, condemned what she described as the “attempted violent attacks” against the Clintons and Obama.