Sen. Dick Durbin teases Green New Deal sponsors: ‘What in the heck is this?’ 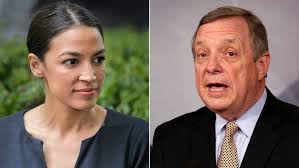 Rep. Alexandria Ocasio-Cortez, D-N.Y., and Sen. Ed Markey, D-Mass., are facing growing pushback within their own party over their Green New Deal proposal.

Sen. Dick Durbin, D-Ill., told MSNBC’s “Morning Joe” on Wednesday he was having trouble grasping the legislation in its current form after he was asked if he would vote for it.

“I can’t tell you, to be honest with you. I have read it and I have reread it and I asked Ed Markey … what in the heck is this,” the Democrat said as his hosts erupted in laughter.