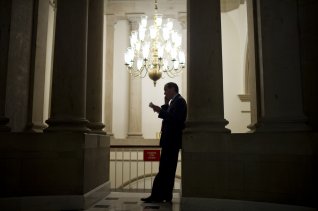 It’s been 22 years since the last amendment to the Constitution took effect, but Senate Democrats are hoping to alter the nation’s founding document once again.

The likelihood of crossing the threshold to amend the Constitution is slim to none, however. An amendment would have to garner support from two-thirds of the House and Senate, before being approved by three-fourths of the states.

Despite that seemingly insurmountable hurdle, Senate Democrats are forging ahead with a plan to bring SJ Res 19 to the floor.

This resolution would add a 28th Amendment, stating that Congress can regulate contributions and spending in federal elections. It would also give state governments the same authority in statewide contests.

Democratic leaders have already said they plan to bring the amendment up for a vote in the Senate by the end of the year. But the resolution’s sponsor, Sen. Tom Udall, D-N.M., is hoping for a vote before the midterm elections.