Senate votes to rein in Trump’s power to attack Iran 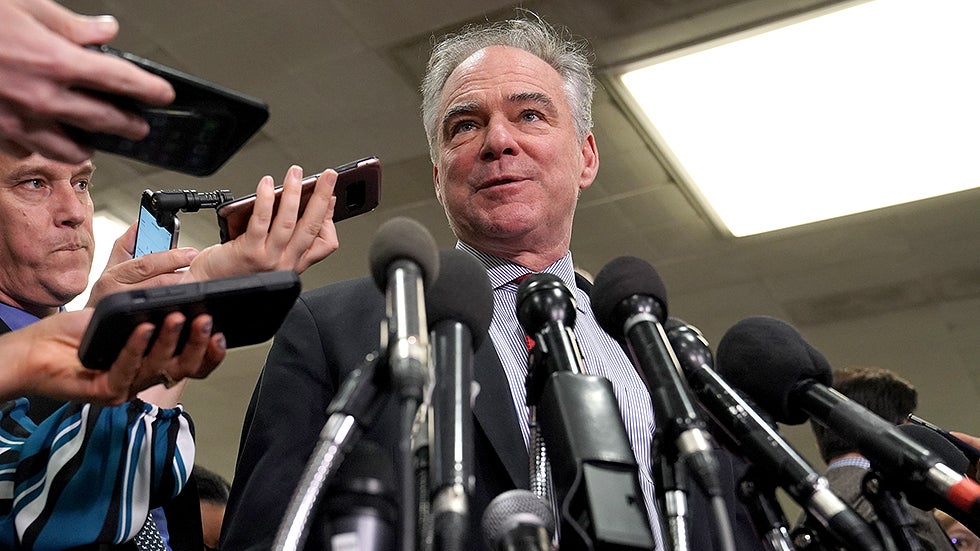 Eight Senate Republicans voted with all 47 Democrats on Thursday to rein in President Trump’s ability to take military action against Iran, paving the way for a veto showdown with the White House.

Senators voted 55-45 on the resolution, spearheaded by Sen. Tim Kaine (D-Va.), that would require Trump to pull any U.S. troops from military hostilities against Iran within 30 day unless he gets congressional approval for the military actions.

The rebuke comes just a week after senators voted to acquit Trump in his impeachment trial.

GOP senators who supported the resolution argued it was about clawing back some of the warmaking authority Congress has ceded to the executive branch in recent decades, and not a personal slight directed at Trump.

“This is not about the presidency. … This really is about the proper allocation of power between the three branches of government,” Lee told reporters. “Congress has ceased to be in the war declaration driver’s seat.”

Lee added that he was a “big supporter of this president” and that voting for the resolution was “about supporting President Trump in his foreign policy and his effort to make sure we don’t get involved too easily, too quickly and in an unconstitutional way in any war.”

“It is … important to reassert the legislative branch’s role regardless of which party occupies the White House,” Sen. Susan Collins (R-Maine) said, adding that the resolution was “much needed and long overdue.”

The vote marked the latest confrontation between the two sides of Pennsylvania Avenue over foreign policy.

In some instances those tensions have broadly united those on opposite sides of the aisle. In 2017, Congress overwhelmingly passed new Russia sanctions despite opposition from the administration. And in January 2019, the Senate agreed to a measure that warned Trump against withdrawing troops from Afghanistan and Syria — language that was spearheaded by Senate Majority Leader Mitch McConnell (R-Ky.).

But Democrats have also leveraged procedural loopholes that let them force votes over the objections of most Republicans, including McConnell, and pass resolutions with only a simple majority.

The Senate marked a historic first in December 2018 when it voted to end U.S. support for the Saudi-led military campaign in Yemen, the first time since the implementation of the War Powers Act in 1973 that the chamber passed a resolution under the law. Republicans, who then controlled the House, blocked the resolution, but Congress passed it again in early 2019 and forced Trump to issue his second veto.

Congress followed that up in July 2019 with legislation to block arms sales to Saudi Arabia and the United Arab Emirates. That resulted in another three vetoes from Trump, all of which Congress failed to override.

Each of those, similar to Thursday’s vote, passed with the support of Democrats and less than a quarter of the GOP caucus.

The White House has pledged that the president will veto the resolution if it reaches his desk, arguing that it “fails to account for present reality.”

“This joint resolution is untimely and misguided. Its adoption by Congress could undermine the ability of the United States to protect American citizens whom Iran continues to seek to harm,” the Office of Management and Budget said.

Trump urged Republicans to reject the resolution in a pair of tweets, arguing that “Democrats are only doing this as an attempt to embarrass the Republican Party.”

“It is very important for our Country’s SECURITY that the United States Senate not vote for the Iran War Powers Resolution. We are doing very well with Iran and this is not the time to show weakness. Americans overwhelmingly support our attack on terrorist Soleimani,” he added. “If my hands were tied, Iran would have a field day. Sends a very bad signal.”

The fight over Trump’s Iran war powers moved to the forefront earlier this year after the United States launched an airstrike that killed Iranian Gen. Qassem Soleimani, sparking days of escalating tensions between Washington and Tehran.

The House passed its own resolution on the matter, but because it’s a concurrent resolution it does not go to the president’s desk and does not traditionally have the force of law. House Democrats have suggested they will take up the Senate resolution, setting up the veto fight with the White House.

The Senate would not have the votes to override a veto. But Kaine argued that even forcing Trump to use a veto could serve as a check on the president’s actions.

“He may not have a lot of faith in congressional prerogatives, but he does know that we’re all hearing from constituents and that a majority in both houses are saying we don’t think we should be in this war. So though he vetoed the Yemen resolution … he told the military to stop refueling jets on the way to bombing runs,” Kaine said.

“If he vetoes it, I think the fact of us getting it to him may still influence his thinking,” Kaine added.

McConnell publicly urged Republicans to oppose the war powers resolution, arguing that it was “blunt and clumsy” and would “severely limit the U.S. military’s operational flexibility to defend itself against threats posed by Iran.”

“The ill-conceived potshots at presidential authorities in the wake of a strike that succeeded using the blunt instrument of a war powers resolution is no substitute at all for answering these broader questions” on foreign policy strategy, McConnell said.

But support for the bill grew throughout the week. Supporters started the week with four GOP senators — Collins, Lee, Paul and Young — committed to backing the bill.

Sen. John Thune (R-S.D.) indicated that he expected there would ultimately be more GOP support for the war powers resolution. He added that the “universe” of potential GOP “yes” votes was more than the four that were backing the bill at the time, but significantly fewer than the 20 that would be needed to override a veto.

“We’ve got members who want to see a new [authorization for use of military force] for anything that we do abroad. And then we’ve got other members who, like I said, think that constitutionally Congress needs to claw back some … of the powers we’ve given to the executive,” Thune said.

Lee and Young made a pitch for the bill during a closed-door caucus lunch, and by the time the Senate held an initial procedural vote on Wednesday eight GOP senators were on board.

Kaine had estimated that in addition to the initial four GOP senators, approximately five Republican senators were viewed as in play.

“Beyond the four it’s probably maybe five additional possibles, but we may not get all of them,” he told reporters on Tuesday about potential, additional Republican support.

The bill overcame an effort by Republicans earlier Thursday to insert changes into the resolution that supporters warned would ultimately kill the bill.

Democrats raised the alarm about a proposed amendment from Sen. Tom Cotton (R-Ark.) that would have carved out an exemption for troops in action against designated terrorist groups.

Cotton accused Kaine of trying to act like “a lawyer for Iranian terrorists.”

But a Senate Democratic aide warned that the amendment from Cotton would allow the “Department of Justice OLC lawyer to give any president a green light to carry out lethal military operations against at least 30 designated foreign terrorist organizations.”

“This is a bright green light for forever wars and would further hollow out Congress’ war-related power,” the aide added.

Senate Minority Leader Charles Schumer (D-N.Y.) also urged senators to reject the Cotton amendment, warning Democrats would have to vote against the war powers resolution if it was added.

“Sen. Kaine told me that if this amendment passed, the Cotton amendment, he’d be forced to vote against his own bill,” he said. “So, what good would that do, for those of us who want to pass it?”