Should Obama Have Stopped to Shake Hands With Cuba’s Raul Castro? 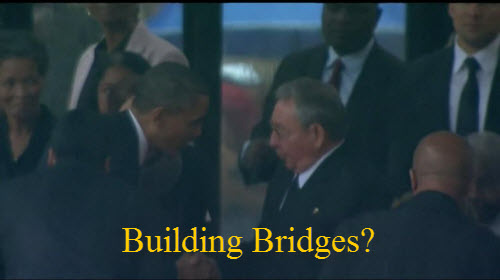 President Obama stopped to shake hands with Cuban President Raul Castro today at Nelson Mandela’s memorial service. Some are calling into question the handshake given the long history of distrust between the U.S. and Cuban governments.

Radio talk show host Michael Graham acknowledged that it’s the president’s job to deal with unpleasant people. However, he said, “I would say unless he’s going to talk about Alan Gross, the American who has been held there for four years, […] that would be something to chat about.

Fox News contributor Jehmu Greene countered, “It wasn’t a conversation; it wasn’t a diplomatic meeting. It was a handshake.”

On a day spent remembering a man who brought people together, Greene said we should ask ourselves, “What would Nelson Mandela do? […] We can’t also forget that there are so many families who have been separated by 90 miles of water.”

Bill Hemmer interjected, “There are a lot of those families who would tell you it’s the Castros who separated them.”