Susan Rice on Benghazi: I don’t have time to think about the false controversy 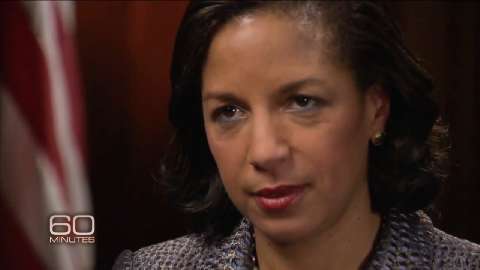 National Security Adviser Susan Rice says she has no regrets about taking the Sunday show interviews that brought her career under fire in September 2012.

Pressed Sunday on CBS’s “60 Minutes” as to why Hillary Clinton didn’t appear for interviews following the lethal attacks on the U.S. Consulate in Benghazi, Rice said she had filled in willingly because of the then-secretary of state’s particularly “painful” and “stressful” week.

“I don’t have time to think about the false controversy,” Rice said. “In the midst of all of swirl about things like talking points, the administration has been working very, very hard across the globe to review our security of our embassies and our facilities. That’s what we ought to be focused on.”

Speaking in 2012 on multiple TV shows four days after the Benghazi attacks killed four, Rice hewed to the initial White House line that the attacks were a spontaneous response to protest an anti-Muslim video. “This is not an expression of hostility in the broadest sense toward the United States or to U.S. policy,” Rice said at the time.

Accusations that Rice made deliberately misleading statements about the attacks being “spontaneous” in the interviews later led her, Stahl said, to miss a chance to be nominated as secretary of state.