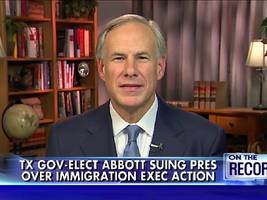 Texas Gov.-elect Greg Abbott announced Wednesday that Texas and 16 other states are suing the Obama administration over the president’s executive actions on immigration.

Abbott, in a news conference in Austin, said immigration policies should be fixed by Congress, not by presidential “fiat.”