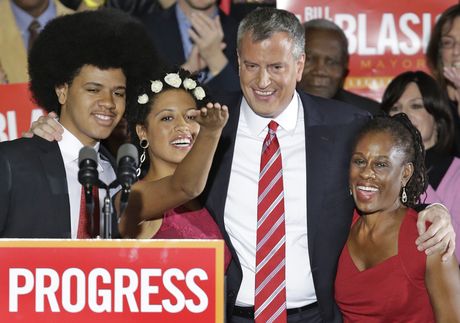 Mr. de Blasio’s landslide victory made him a hero among liberal activists, who likened him to Sen. Elizabeth Warren of Massachusetts and embraced his campaign promises to raise taxes on the city’s wealthier residents and use the new pot of money to expand government programs and tackle inequality.

Republican strategists already anticipate being able to use the mayor’s stances as a wedge against Democrats running for national office, and analysts said some Democrats may indeed have to spend time defending their left flank.

“De Blasio poses interesting challenges for the Democratic Party,” said Darrell M. West, director of the Governance Studies at the Brookings Institution. “He is more liberal than the typical officeholder and will attract a lot of media attention given his platform in New York City. That will inject him into many public discussions. I don’t think he will become a Ted Cruz figure for the Democratic side, but he has the potential to be a Howard Dean who seeks to rally the public towards a more progressive view of the world.”

Mr. Dean’s 2004 presidential campaign remains a topic of debate, with some saying he pushed his party too far to the left and cost it the general election, while others said he energized the party’s liberal base, especially its “netroots,” and paved the way for both the party’s 2006 seizure of Congress and Barack Obama’s emergence as a progressive hero in the subsequent election.