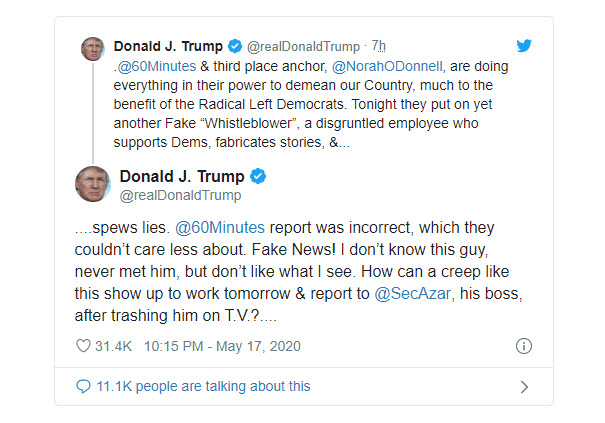 President Trump late Sunday accused CBS’ “60 Minutes” of putting the spotlight on another “Fake Whistleblower” who wants to inflict damage on his administration’s coronavirus response in order to benefit the “Radical Left Democrats.”

Dr. Rick Bright, who has a Ph.D. in virology and ran the Biomedical Advanced Research and Development Authority, reiterated earlier claims that the government was slow to respond to the unfolding pandemic and said the administration was instead worried about politics instead of science. He blamed Health and Human Services Secretary Alex Azar of not heeding early warning about the virus.

Bright told the show that there was a Jan. 23 meeting where he was the only person in the room who said, “We’re going to need vaccines and diagnostics and drugs. It’s going to take a while and we need to get started.”

Bright told Norah O’Donnell, the “60 Minutes” correspondent, that his resistance to Trump’s push of hydroxychloroquine was what ultimately cost him his position at the agency.