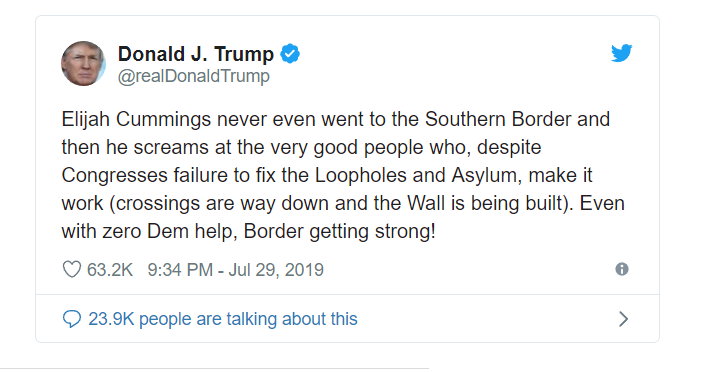 “Elijah Cummings never even went to the Southern Border and then he screams at the very good people who, despite Congresses failure to fix the Loopholes and Asylum, make it work (crossings are way down and the Wall is being built). Even with zero Dem help, Border getting strong!” Trump tweeted Monday night.

Trump also went after Baltimore, which Cummings represents, pointing out the high levels of crime in the city, as well as the money that has gone into attempting to put an end to the violence.

“Baltimore’s numbers are the worst in the United States on Crime and the Economy. Billions of dollars have been pumped in over the years, but to no avail. The money was stolen or wasted. Ask Elijah Cummings where it went. He should investigate himself with his Oversight Committee!” Trump added in the two-tweet string.