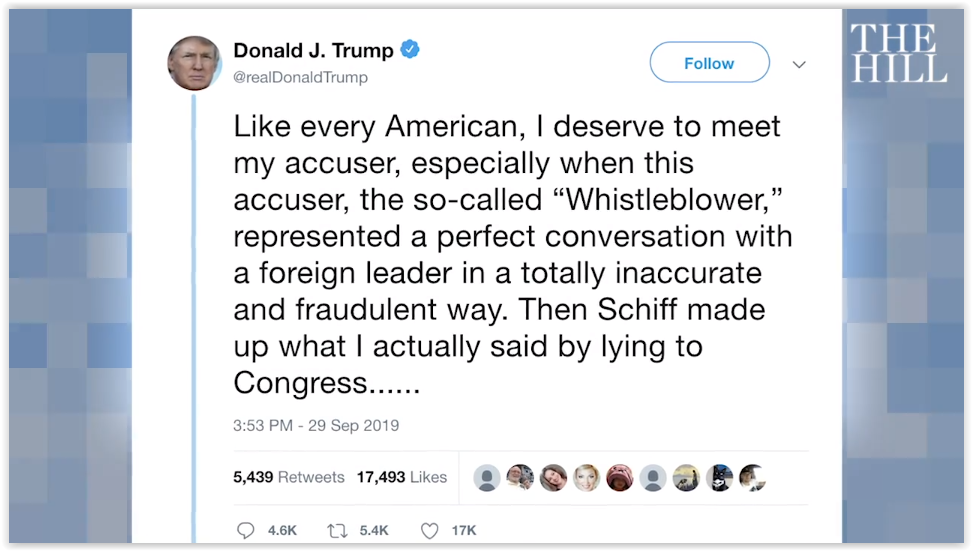 President Trump on Sunday evening called for the outing of a whistleblower and railed against other individuals, including Rep. Adam Schiff (D-Calif.), at the center of a growing scandal involving his phone call with Ukraine’s president, warning there could be “Big Consequences.”

“Like every American, I deserve to meet my accuser, especially when this accuser, the so-called ‘Whistleblower,’ represented a perfect conversation with a foreign leader in a totally inaccurate and fraudulent way. Then Schiff made up what I actually said by lying to Congress,” Trump said in a series of tweets.

“His lies were made in perhaps the most blatant and sinister manner ever seen in the great Chamber,” he continued before adding that he wants Schiff, the chairman of the House Intelligence Committee, “questioned at the highest level for Fraud & Treason.”

“In addition,” he added, “I want to meet not only my accuser, who presented SECOND & THIRD HAND INFORMATION, but also the person who illegally gave this information, which was largely incorrect, to the ‘Whistleblower.’ Was this person SPYING on the U.S. President? Big Consequences!”

Details of the phone call first emerged after reports that a whistleblower had raised concerns about it to the Office of the Director of National Intelligence. A readout of the call, which was released last week, showed Trump asking Zelensky to investigate former Vice President Joe Biden and his son Hunter Biden.

The fallout from those reports led to a flood of new calls on Capitol Hill for an impeachment inquiry. Following Pelosi’s announcement to formally launch impeachment proceedings, the White House released not only the readout of the call but also the whistleblower’s complaint and the intelligence community’s inspector general’s report.

Little is still known about the whistleblower, who, according to the complaint, was not a direct witness to the conversation but was told about it by White House colleagues. The New York Times reported the person is a CIA officer who is currently working at the agency’s headquarters in Langley, Va.

Schiff, who as the House Intelligence Committee chairman is helping oversee the probe into the phone call, has said the whistleblower is likely to testify behind closed doors on Capitol Hill. Mark S. Zaid, one of the lawyers representing the whistleblower, confirmed on Sunday evening that they were continuing to coordinate with lawmakers but that no time or date had yet been set for testimony.

The impeachment inquiry marks a significant turning point in the Trump era, with the vast majority of House Democrats now backing the proceedings. Even if the lower chamber does decide to impeach Trump, the GOP-controlled Senate is likely not to convict Trump of any wrongdoing.

The president and his allies have repeatedly denied any wrongdoing and insist impeachment will be a winning development for them as they head into the 2020 election. Democrats, meanwhile, are taking their case to the voters, who, according to opinion polls in recent months, have been largely opposed to impeaching the president. A flurry of recent polls over the past week have suggested the tide is turning, however, with Americans now split on the topic.

The Hill has reached out to both Schiff and Zaid.