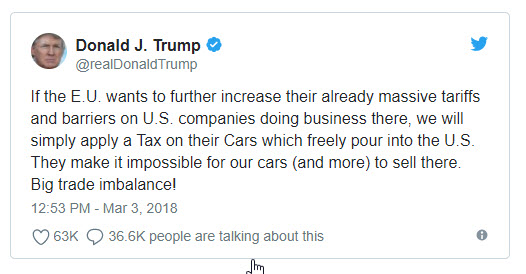 President Trump on Saturday threatened the European Union with a tax on cars made in Europe, responding to E.U. pushback against his proposed steel and aluminum tariffs — the latest fiery rhetoric in a brewing trade war.

“If the E.U. wants to further increase their already massive tariffs and barriers on U.S. companies doing business there, we will simply apply a Tax on their Cars which freely pour into the U.S.,” Trump said on Twitter.

Among them was European Commission President Jean-Claude Juncker, who said Friday that the E.U. could impose tariffs on Harley Davidsons, Levi jeans and bourbon.