Trump hits back at Rubio over ‘con artist’ insult 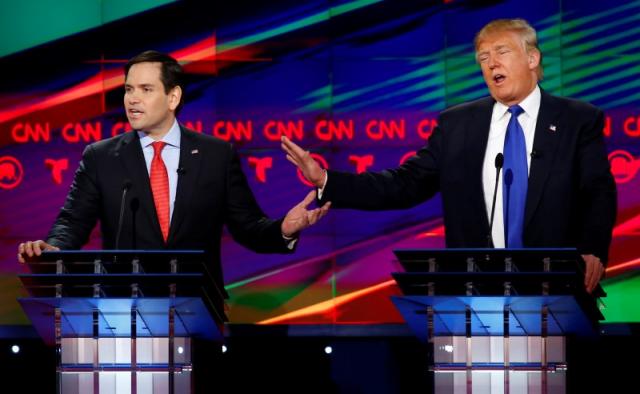 With dueling appearances in Arkansas and Georgia, the billionaire businessman and U.S. senator from Florida continued an onslaught of personal insults that began on a debate stage on Thursday and looks likely to go on for months.

“The majority of Republican voters do not want Donald Trump to be our nominee, and … they are going to support whoever is left standing that is fighting against him to ensure that we do not nominate a con artist,” Rubio told reporters in Georgia.

Trump, speaking in front of his private plane in Arkansas, along with Christie, whose endorsement on Friday shocked Republican leaders anxious about his likelihood of winning the nomination, belittled Rubio and accused him of being fresh.

“I watched this lightweight Rubio, total lightweight, little mouth on him, ‘bing, bing, bing’ … and his new attack is he calls me a con artist,” Trump said. “The last thing I am is a con man.”

635 Comments - what are your thoughts?