Trump meets Putin after blaming US for bad relations 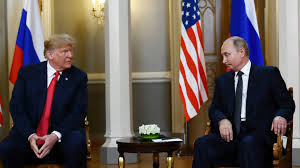 President Trump met with Russian President Vladimir Putin for more than two hours in a one-on-one setting Monday in Helsinki, Finland, hours after blaming the United States for the bad relationship between the two countries.

As the two sat down in front of photographers before heading into their meeting, Trump said he and Putin would discuss trade, arms control and China, but made no mention of hot-button issues that have created tensions between the U.S. and Russia, such as Moscow’s interference in the 2016 presidential election, Syria, Ukraine and nerve-agent attacks in the United Kingdom.

“I think we will end up having an extraordinary relationship,” Trump said. “I really think the world wants to see us get along.”

Only interpreters were in attendance during the meeting.